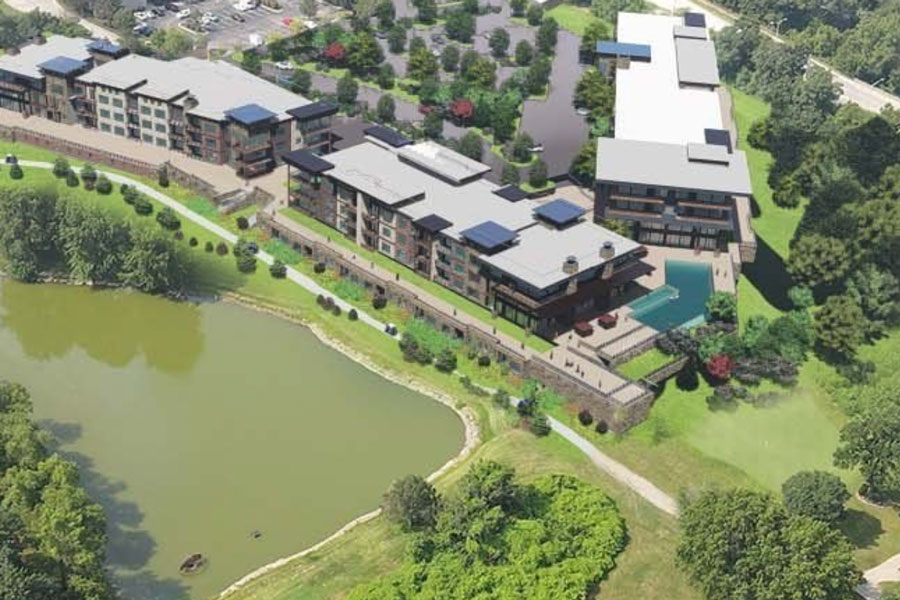 Ahead of Moday's Overland Park City Council meeting where councilmembers will consider a plan to build a high-end apartment complex at Deer Creek Golf Club, residents are voicing concerns about how the project would impact the surrounding area. Image via Overland Park city documents.

Some Overland Park residents are voicing their worries about a plan to build a new up-scale apartment complex next to the Deer Creek Golf Course near 135th and Metcalf Avenue.

Some residents aired their concerns about the project at a community meeting organized by some city councilmembers on Friday afternoon.

That comes as the full city council is set to discuss the project at its meeting Monday night.

The proposed project includes the construction of a high-end apartment complex on 133rd and Metcalf, near the Deer Creek Golf Course and neighboring housing subdivisions.

The project, developed by Lenexa-based GreatLIFE KC, would put three apartment buildings on a roughly 11-acre stretch of land that encompasses the southwest corner of the golf club.

Plans for the complex came before the Overland Park Planning Commission for approval in December.

The commission voted to continue the item after failing to reach a consensus during discussion, but it ultimately approved last month after additional discussion and revisions from the developer.

“Once we do this multi-family improvement along with the stream bank stabilization repairs, the golf course will be invested in as well to bring it back to its former glory, which it deserves,” he said.

Several residents at the meeting spoke against the project for various reasons, from the development’s large size to its potential impacts on accessibility to the area.

Resident Sheldon Grossman said the increase in traffic from the development could result in an increase of traffic incidents in an area where they’re already common.

Not only that, he said, but the apartments would obstruct the neighboring view of the golf course.

“I built my house with a view of the golf course on purpose,” he said. “I decided on purpose that I wanted a certain view, and you are robbing me of that view.”

Resident Jill Schram noted a concern about a lack of clarity about the developer’s alternative plan the project did not receive approval, saying she had been told the golf course would be closed if the housing project didn’t get approval and the land would be used solely for new homes.

“Quite frankly, it’s zoned (for single-unit residential) so it would be more appropriate to have a home there,” she said. “But I do think that there has been so much confusion and conflation of the ‘Save the Golf Course’ versus the land issue thing.”

Resident Sheila Rodriguez also said she sensed a lack of transparency from project developers about the true nature of the project and its impact on the golf course.

“I do not believe that the developer has been forthcoming or honest with their true long-term intentions for this area,” she said. “And I’m concerned that if this gets approved, despite this well-organized opposition, it could set a precedent for other areas.”

The Deer Creek project will go before the Overland Park City Council for consideration at tonight’s meeting, which starts at 7:30 p.m.

For more information about what is proposed, click here to view the meeting’s agenda.