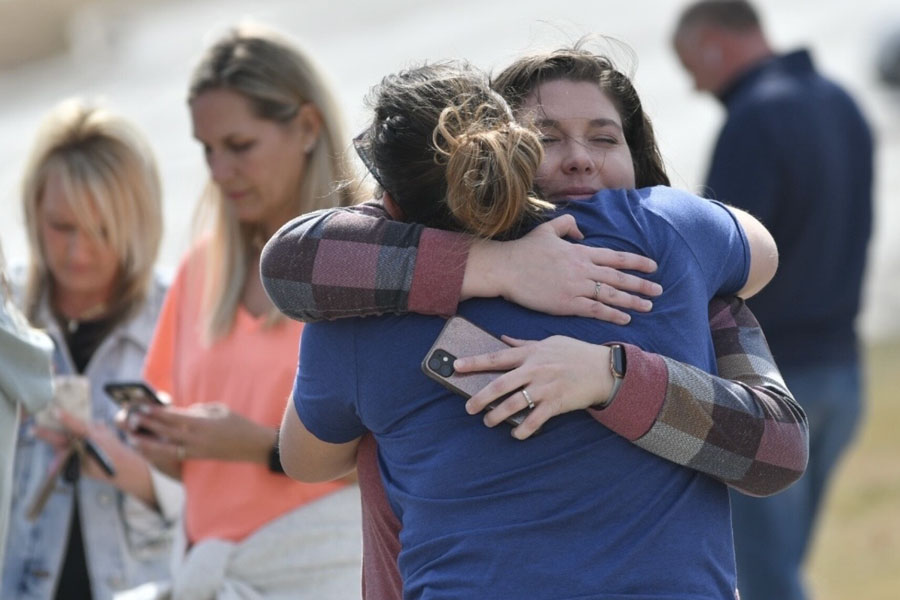 Olathe Police say a school resource officer and administrator have been injured following a shooting at Olathe East High School Friday morning. A suspect has been taken into custody, according to police, and there is "no active threat." Above, families of Olathe East High School students wait at the Family Video to be reunited with their kids, after a shooting inside the school on Friday, March 4, 2022. Photo credit Carlos Moreno/KCUR 89.3.

This is a developing story that will be updated as more information is learned.

Here’s what we know

• The student, an 18-year-old male, has been arrested.

• Overland Park Regional Medical Center says two of the individuals have been discharged, and one remains hospitalized in critical condition.

• No others students were injured.

• The district says students are being dismissed and reunited with their families Friday afternoon and counseling services will be available.

A third person, an 18-year-old male student at Olathe East, was also shot and has been arrested.

Olathe Police Sgt. Joel Yeldell, a department spokesperson, told media Friday afternoon that all three injured people were in stable condition and are expected to survive.

It is unclear who shot first or how many shots were fired.

Olathe Police said Friday afternoon that there was no active threat at the school.

The people involved in the shooting have not been publicly identified, though the Olathe School District said the families of those injured have been notified.

Olathe PD have told parents of Olathe East students to go to the Family Video at 12708 Black Bob Road for reunification with their children.

The Olathe School District released reunification points, where parents and families could meet their students, who were being released Friday afternoon.

Student drivers will be released in a staggered fashion and escorted to their vehicles.
Special Education bus riders will come home on buses from Olathe East as normal.
Admin/LE will facilitate reunification. Our goal is to reunify students with their families as soon as we can.

Agents from the Kansas City Division of the Bureau of Alcohol, Tobacco, Firearms and Explosives are on the scene assisting with the investigation.

Nikki Lansford contributed to this report.

This story will be updated as more information is learned.