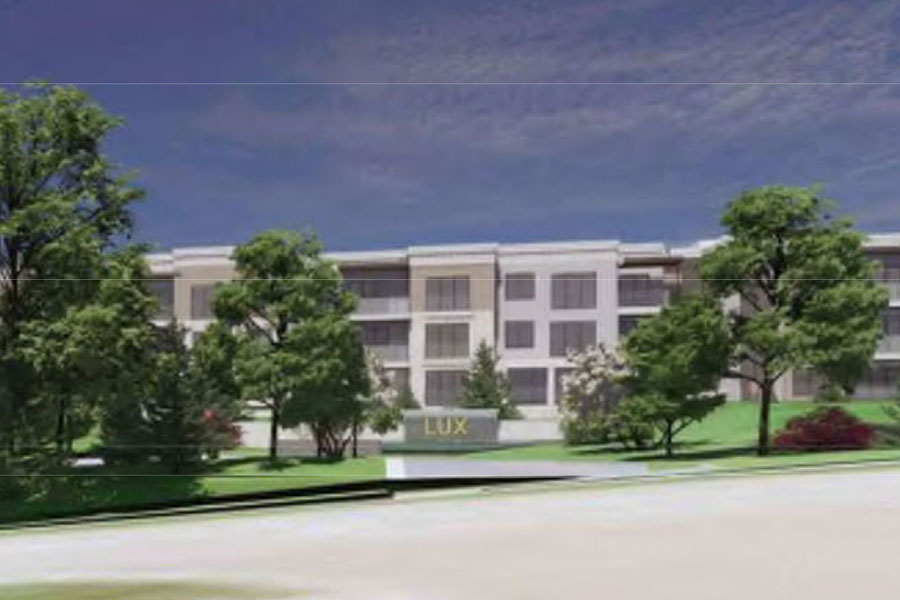 The Overland Park City Council approved plans for a multi-story housing development for residents ages 55 and above last night. The city's planning commission initially denied rezoning for the project, but the developer amended the proposed height of the buildings from a maximum of six stories, down to three, four and five stories. Rendering from city documents

The apartment complex includes buildings with three, four and five stories, a reduction from the five- to six-story buildings in the project’s original proposal.

It also includes a total of 228 apartment units and 360 parking spaces.

After being continued from a meeting in September, developers came before the Planning Commission for review in October.

Residents who live near the proposed property voiced concerns at that time about the potential for more traffic at the site, the large size of the property and its aesthetic impacts on their neighborhoods.

At that time, the commission denied the developer’s request for rezoning, which would have allowed for a building of up to six stories tall.

But commission members changed their minds at last month’s meeting, following revisions from the developer that included lower building heights.

Before reaching final approval from the council, the proposed project underwent various adjustments as a result of resident and commissioner concerns.

Some of these included a reduction from 236 units to 228 and lowering the height of the buildings and reducing the property’s amount of asphalt coverage.

The developer also added landscaping to the property’s parking garage to shield it from the view of nearby residents.

Kevin Berman, an architect with the Hoefer Welker development team, said cutting down the size of the buildings and adding more open space improved the project.

“Gestures like this, I really think, enhance the feeling that the building is open to the community,” he said. “It’s less massive and has more separation.”

Some residents encouraged the council to approve the project, citing a need for more senior living options in the community.

Some said they, as seniors themselves, would be interested in living somewhere like this. Others wanted more options for their parents, who fit into that age group.

Resident Fred Cooley said his mother, who is 87, would benefit from a housing option like this.

“I know change is hard to accept,” he said. “But I think change and evolution, as far as Overland Park is concerned, has always happened and It’s always been for the greater good.”

Several residents also spoke against the project, including those who live in the neighboring residential areas to where it would be.

They expressed concerns that property values to the surrounding homes would go down as a result of the project, and that it would hinder the quality of life for its neighbors.

Resident Michael Beck said his family chose in the Solera Reserve subdivision for its location and the surrounding neighborhood, which would drastically change as a result of this project.

“The things that we’ve appreciated about Overland Park over the years is the intentionality that consistency and predictability that have gone into city planning,” he said. “This requested zoning change, in our opinion, is a significant change. That would be a disservice to folks like us, who made what we believe to be a very important and informed investment.”

In discussion, some councilmembers were firmly opposed to the project, while others felt the revisions were sufficient enough to pass it.

Councilmember Melissa Cheatham said the project fits into the city’s comprehensive plan for future development, which puts an increase of commercial and higher density residential developments in the area.

“I did have some hesitation about this as I made my decision because I like to see a transition from the highest density to the lower density,” she said. “But I do think that the applicant gets towards that direction with the transition that they put into place, setting their building back further from 137th Street, starting with the three-story building along 137th Street and tucking that most dense corner closer to the existing four-story apartments.”

Council member Jeff Cox said he did admire the project, but that this wasn’t the right place for it.

He said the fact that the Planning Commission unanimously approved it after denying it demonstrates that city staff are conflicted about it.

“This is about as close a call to me as there is,” he said. “I think this is a great project. I think there’s need for this project. It’s a beautiful project. But I think it’s in the wrong place.”

The council ultimately passed the development plan on a 7-4 vote.