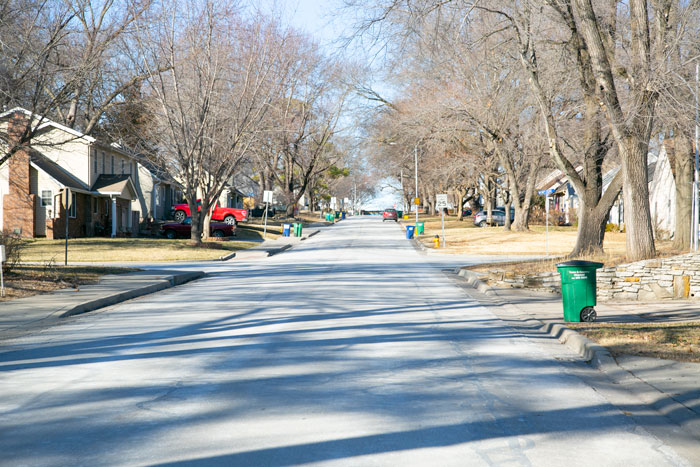 The Overland Park City Council this week advanced a five-year capital improvement budget that includes chip seal projects. The road resurfacing method has long been controversial among many residents, who say it is messy and damages vehicles. File image.

Chip seal, a street restoration method controversial among many in Overland Park, is still on track to continue at least through the next couple of years.

But as some residents continue to organize against it and as the city confronts a backlog of needed street improvements, more councilmembers are speaking out against chip seal and saying they’d be willing to consider alternatives.

The city council on Monday moved forward with the latest version of the city’s five-year capital improvement budget, and there will be a public hearing in April. It still includes chip seal.

But one after the other, councilmembers expressed distaste for it, saying they’d abide it for a couple of years until an citizen infrastructure advisory group formed last year makes its recommendations for long-term solutions.

“I’m not a fan of chip seal,” said Melissa Cheatham, noting the emails she’s received about it. “I am on board with moving away from it,” she said.

But Cheatham, like some others on the council, said she didn’t feel comfortable removing it from the upcoming street maintenance budget, a move suggested by Councilmember Faris Farassati.

Putting off around 210 lane miles of scheduled street repair because it uses chip seal would only put the city further behind, several councilmembers argued.

Chip seal has been a hot button topic for years among some Overland Park residents.

It was an issue in last year’s city council and mayoral races. Farassati, who ran for mayor and did not make it out of the primary, and Sheila Rodriguez, who ran unsuccessfully for a council seat covering an area south of I-435, have opposed it, saying the loose rock used in the method is messy, damages cars and is a danger to anyone who falls on it.

The issue has proved thorny enough that last month members of the city council’s public works committee couldn’t reach agreement on it and sent it on without recommendation to the full council.

Worries about cost of alternative

Though complaints against it have often been emphatic, city officials have hesitated to change.

Former City Manager Bill Ebel cautioned the previous council that other types of street maintenance would be prohibitively expensive. Since then a citizen group has been appointed to take a comprehensive look at all of the city’s infrastructure needs and how to fund them.

Those needs are significant, according to members who cited estimates that it would take $250 million to $300 million to catch the city up on needed street maintenance.

“We need to begin the process of not living in denial about that,” said Councilmember Jeff Cox, as he proposed using $11 million in unallocated federal pandemic relief funds through the American Rescue Plan Act to use as a “down payment” on more long-term funding.

ARPA funds can’t legally be used for street repair, but Cox suggested city staff could shuffle the money to take care of it. He added he preferred chip seal not be included, but realized the end of chip seal won’t happen overnight.

That idea didn’t have the committee’s support, though. Neither did an amendment offered by Farassati to move the capital and maintenance budgets ahead without chip seal.

“The time has arrived for us to pay attention to what the people of Overland Park repeatedly have said,” he said. He added he could have supported Cox’s idea.

‘Not in the best interest’ to end chip seal right now

Some councilmembers said they are placing their hope in the special infrastructure advisory group as they voted to at least temporarily continue with chip seal. That committee’s recommendations are not due out until later this year.

Councilmember Fred Spears, chair of the infrastructure committee said it’s important to “keep every tool in the toolbox” when it comes to street preservation.

“Eliminating chip seal at this point in time is just not in the best interest of the city,” he said, “although five years from now things will probably be significantly different.”

The infrastructure advisory group is currently taken residents’ feedback on the best ways to maintain and improve city streets. Those interested in responding can go here.

The capital improvement budget is the city’s five-year blueprint for spending priorities.

It’s revised every year and does not commit the city to any bids or contracts.

The budget approved this week also included an increase of $75,000 for additional trees in the Monitor Square and Briarford Place neighborhoods to replace trees set to be removed by street reconstruction in 2023.

The final vote to move the capital improvements and maintenance budgets ahead was 8-3, with Hamblin, Cox and Farassati voting against.