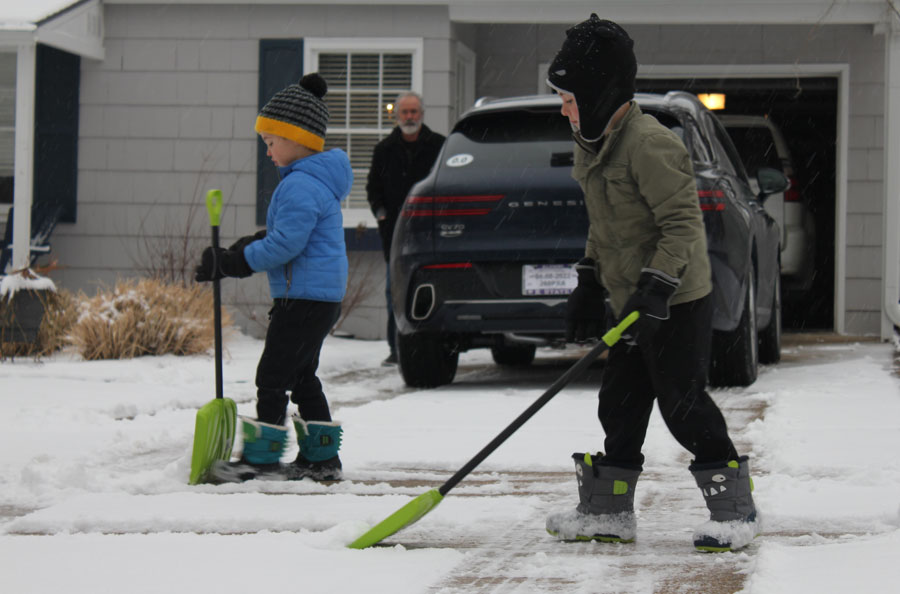 Two brothers, Wesley (left) and Deacon, help clear off their family's driveway in Roeland Park on Thursday afternoon. Snowfall totals around the Kansas City area ended up being between 2 and 4 inches, lower than the anticipated 5 to 9 inches predicted on Wednesday. Photo credit Kyle Palmer.

Well, at least it wasn’t as bad as predicted.

Following a final round of light snow Thursday night, the National Weather Service’s says Johnson County generally saw between two and three inches of snow between Wednesday night and Friday morning — significantly lower than the five to nine inches forecast on Wednesday, though some points did receive slightly more than five inches.

More on why this storm turned out to be not as severe as some predicted, but first, here is a look at snowfall totals from around Johnson County, per NWS’s 24-hour snowfall reports:

Here are some other snow totals from around the metro:

Jard Leighton, a meteorologist with the NWS’s Kansas City field office, said snowfall totals didn’t hit the forecasted mark, in part, because of where the sun is positioned in March.

“The sun angle is equivalent to something in late September, early October,” Leighton said. “It really helps eat away at the snow even though temperatures are below freezing.”

This made roads more wet than icy or snowy on Thursday, Leighton said. But that doesn’t mean drivers should take it easy Friday morning.

The snow band crept up into the Kansas City metro Thursday night — when there was no sun and temperatures were well below freezing — could complicate driving on Friday.

“A lot of people are probably going to be lulled into a false sense of security that this event kind of didn’t do what was expected,” Leighton said. “Now that the sun angle’s gone, there’s a chance we can see it perform the way we thought it would.”

Easy to be lulled into security…

The snow today came in a little underdone, and the roads were mostly pretty safe due to treatment and the high sun angle keeping the ice melted.

The sun is gone and the snow has picked up again. Roads will be a mess going into Friday morning.

The snow was expected to totally stop before dawn on Friday and final official snowfall amounts could change.

Some Johnson County students are enjoying a longer than expected spring break because of this latest (and hopefully last) winter storm of the season.

And the Blue Valley and Shawnee Mission districts do not have classes scheduled for Friday because it was set aside as a teacher workday heading into next week’s spring break.