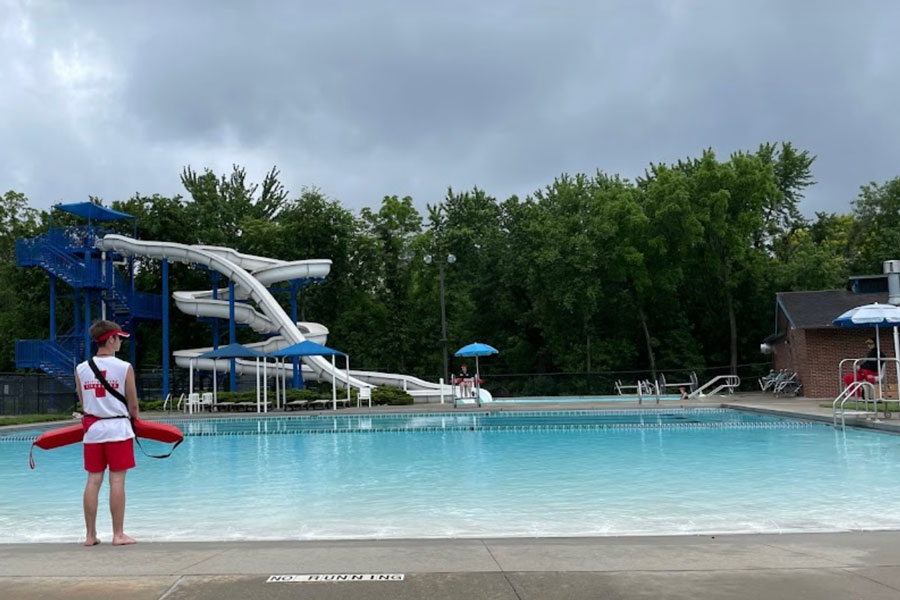 The city of Overland Park says it has currently has only 100 applicants to fill 225 lifeguard positions to be fully staffed for the summer swim season. If more lifeguards don't apply, the city says most outdoor city pools may remain closed all summer. Above, a lifeguard on duty in a previous summer at Young's Pool on 77th Street.

City officials say they are currently short the number of lifeguards they need, creating the possibility that some city pools might operate on reduced hours or remain closed entirely.

This isn’t a new problem locally.

That coincided with broader lifeguard shortages across the country, an issue attributed at least in part to the COVID-19 pandemic.

Overland Park operates six public pools, five of them are outdoor pools that only open for the summer season. (The indoor pools at the Matt Ross Community Center are open all year.)

The city was only able to open three of them last summer — the Tomahawk Ridge Aquatic Center, the Young’s Pool and the Stonegate Pool.

There were 220 total lifeguards on staff in total in 2021, and city officials say there could be even fewer this year.

In a city newsletter, Aquatics Supervisor Renee Reis said that as of this week, there are only enough lifeguards signed up to fully staff one outdoor pool for the upcoming season.

“Aquatics is an incredibly fun operation, but safety has to remain our top priority,” Reis said. “It’s simply not safe to operate pools without a full staff of lifeguards.”

The city says it needs 225 lifeguards to be fully staffed for the summer but currently only has 100 applicants.

If the current number of lifeguards doesn’t increase, Reis told KCTV that the city may only be able to open the pools at Matt Ross and two of the outdoor pools.

“We’re not going to put our staff in a situation where they can’t properly maintain safe standards,” she said.

Lifeguards for city pools begin training on May 1 and the pools are set to open for the summer season on May 30.

Anyone interested in applying to be a lifeguard can do so here. The position starts at $13 per hour.

Staffing shortages have affected other city facilities as well, including at the Deanna Rose Children’s Farmstead, which has warned its summer programming could be curtailed if some seasonal positions are not filled.