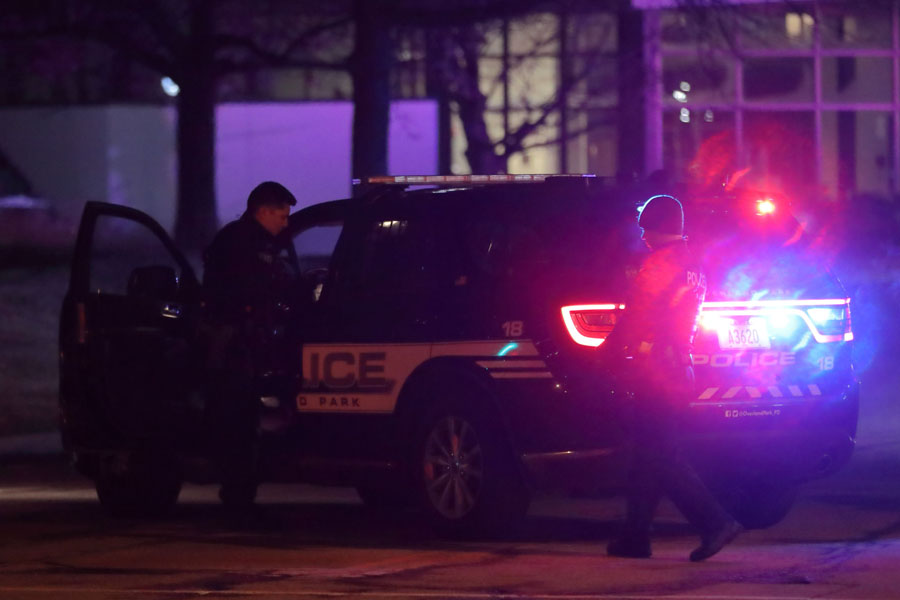 Several major police departments in Johnson County are reporting vacancy rates higher than in years past and acknowledge in an ongoing struggle in recruiting new officers. Above, Overland Park police officers respond recently to reports of an armed robbery at the Marriott Hotel on Metcalf. File image.

With fewer people applying to become police officers than in years past, unfilled positions remain a major concern for some local departments in Johnson County.

The problem is due to a variety of factors, according to officials the Post talked to.

Some agencies attribute their vacancies to the typical cycle of attrition as officers retire and transfer to other departments. Others are growing their forces and adding new positions that have yet to be filled.

Still others say that fewer people want to become police officers for various reasons, including negative perceptions of the profession, which are exacerbating staffing challenges.

Whatever the reasons, fewer qualified applicants means local police departments are competing against each other to attract the best to their forces.

The Post talked to five police departments in northern Johnson County to get a better idea of officer vacancies, how they affect departments and what police officials are doing to try and attract and recruit employees.

Here are some of the trends we found.

How many vacancies are there?

As of late February, more than 60 vacancies existed in five of the biggest police departments in northern Johnson County.

These police departments have different methods of tracking staff vacancies. Still, in general, the current vacancy rates are higher than in past years for each agency.

Here are each department’s vacancy rates for the prior three years:

In the past two or three years, vacancy rates are overall higher than in past years.

More officers are reaching retirement, and police forces have an overall younger personnel on average compared with a decade ago, officials say.

In addition to normal attrition, some police departments are also trying to expand their rosters and add new positions.

Overland Park, for instance, in response to long-standing community concerns, recently launched a crisis intervention unit to address behavioral health and the response to mental health crises. That accounts for 22 out of 31 vacancies in that department.

Meanwhile, in Shawnee, out of the 12 vacancies in that agency six of those were newly budgeted by the city council.

Prairie Village is also allowed to hire two additional commissioned officers this year, for a total of 49.

At the same time, it has become even more difficult to fill positions, as fewer qualified applicants are seeking out a career in law enforcement, officials told the Post.

In years past, police departments would receive hundreds of applications for two or three positions, according to some agencies.

That’s a product of the times, as many fields and industries have been upended by the COVID-19 pandemic over the past two years.

“We’re getting hit hard just like everybody else,” said Det. Bob Valencia with the Overland Park Police Department. “Unfortunately, everybody’s fighting for the same small group of people.”

Other officers have left because they have found careers in law enforcement to be too demanding or not the right fit.

“It takes a lot to be a police officer,” said Prairie Village Chief Byron Roberson. “It’s not an easy process, and we don’t want to make it an easy process. That’s how we avoid George Floyd situations: hiring good people and keeping our standards high and not relaxing that just to get people in the door.”

Some local department spokespersons agreed that the job is demanding, and potential applicants may pursue careers that are less dangerous, less demanding and perhaps higher paying.

Plus, it takes several months to fill positions as potential officers go through screening and a months-long training process at the Johnson County Regional Police Academy.

None of the police departments the Post spoke with said they would lower their hiring standards in order to fill vacancies.

“To begin with, it’s not a job for everybody,” said Capt. Brad Robbins, spokesperson for the Leawood Police Department. “It’s nothing that’s specific to Leawood, and it’s not just Johnson County. Throughout the United States, there’s a very bright limelight that’s being shined on law enforcement, and people questioning the profession. It’s like any profession. There are people that do it for the right reasons, but you don’t always see them. A lot of the focus goes on the small minority that do things for the wrong reasons.”

Some of the local departments the Post spoke with did link ongoing staffing challenges to broader social justice movements in the U.S. that have been critical of police in recent years, citing in particular the protests in 2020 sparked by the deaths of George Floyd, Breonna Taylor and other Black people at the hands of police.

They say that might be discouraging people from seeking careers in law enforcement.

“It’s definitely a nationwide trend, where people aren’t as appreciative or care for law enforcement as much as they had,” said Valencia with Overland Park Police. “I truly believe it’s scaring these young kids that no longer want to do this job, that maybe thought they wanted to.”

Henry Lyons, lead member of the NAACP chapter representing Olathe, Overland Park and Leawood, echoed some of the comments from the police representatives.

“I agree with the police departments, however, I would add that the anti-police problem is not just in Johnson County but nationwide,” Lyons said via email. “All police are being blamed because of some bad police. People should realize that law enforcement is a good career and that you cannot change a system from the outside all the time. It also helps to change a system from the inside.”

But there is evidence to suggest such perceptions of police are not necessarily a main driver of ongoing shortages. The Marshall Project reported last year that, since the start of the COVID-19 pandemic, law enforcement had seen a comparatively smaller percentage of job losses than the American economy as a whole.

Major Jim Baker, spokesperson for the Shawnee Police Department acknowledges other factors such as the current job market and a lessening interest in pursuing a career that compounds the vacancy issue.

“I think it was just kind of a perfect storm for us not getting a lot of quality applicants interested in the job,” Baker said.

As part of efforts to attract recruits, some spokespersons said they’re developing more incentives, enhancing pay, and collaborating with other police departments on how to support each other to fill vacancies.

While vacancies remain unfilled, more emphasis is placed on patrol, and staffing resources are diverted away from specific units, such as traffic monitoring and community education.

Many officers end up working overtime to cover shifts, the agencies say.

Nevertheless, the departments the Post spoke with stressed that vacancies have not had an impact on response times or their ability to serve their communities effectively.

But understaffing can cause fatigue and burnout, particularly when officers work longer hours.

“We are going to effectively serve the community no matter what, it’s just a matter of how thin we get stretched, how much overtime is involved to cover minimum staffing and vacancies,” said Baker with Shawnee Police. “Obviously, the more resources we have, the better we can serve, but we will never let the community be not served. We will always be there.”

Below are the links to each police department’s career webpages.