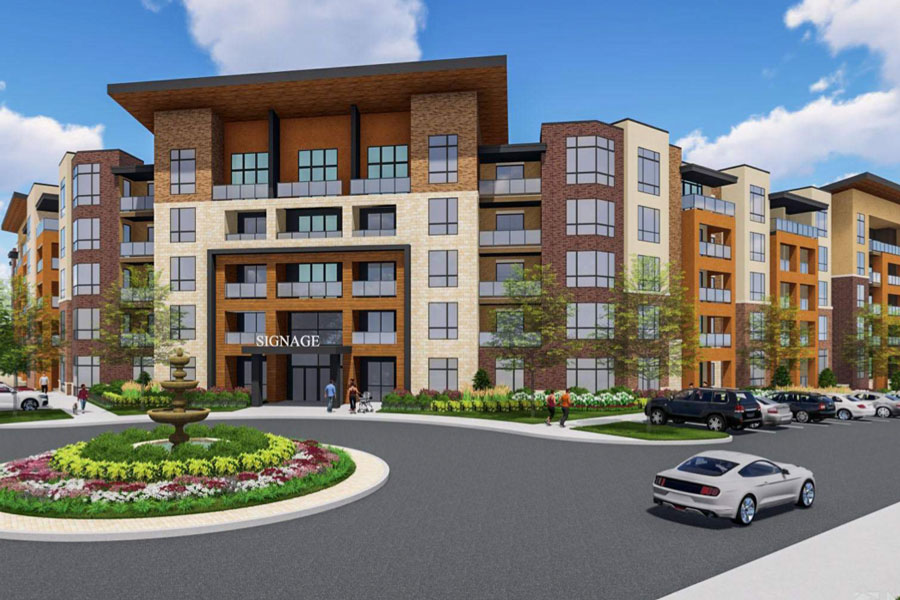 The Overland Park Planning Commission unanimously approved initial plans for a new residential and retail development on part of the site of the Southglen shopping center at 119th and Metcalf Avenue. Rendering from city documents

A developer wants to build new apartments on the site of a former gym in a shopping center next to Blue Valley North High School in Overland Park.

At its Monday meeting, the Overland Park Planning Commission reviewed and unanimously approved a rezoning request for the apartment complex to be built on the northeast corner of 121st Street and Metcalf Avenue.

That site is on the southern end of the Southglen shopping center, which sits at the corner of 119th and Metcalf.

It would replace a building that was until recently a 24 Hour Fitness and once housed a 12-screen movie theater, which ceased operations in 2000.

The proposed development would use roughly 10 acres of land and would entail removing of some of the neighboring Southglen Center’s land.

The site is near the Overland Crossing shopping center, which is just to the west across Metcalf, and borders Blue Valley North High School to the east.

Project applicant representative Aaron Mesmer said the development will offer a similar layout and amenities to other projects from the developer, such as the Apex at CityPlace.

“We felt like it was a neat opportunity to bring something there that it felt like was the right fit for that community,” Mesmer said. “And to add some vibrancy back that shopping center, which has suffered as a result of the closure.”

The commission widely supported the project in discussion.

Commission chair Holly Streeter-Schaeffer said while she supported the project, its large size should be noted.

“I like this project as well, but I am getting concerned with the length of some of these buildings coming before the Planning Commission,” she said. “We have a length of over 500 feet on one side of a building, and that, to me, seems inconsistent with the requirements that we have as a city.”

Commissioner David Hill said this development would be a beneficial alternative to the one-time movie theater building that currently occupies that land.

“I think it’s a great use for the site,” Hill said. “Particularly in consideration of the current environment. It’s not quite a blighted property yet, but the parking lot is falling apart. It’s a nice redevelopment for the space.”

The commission approved the measure 7-0. It will now go before the city council.