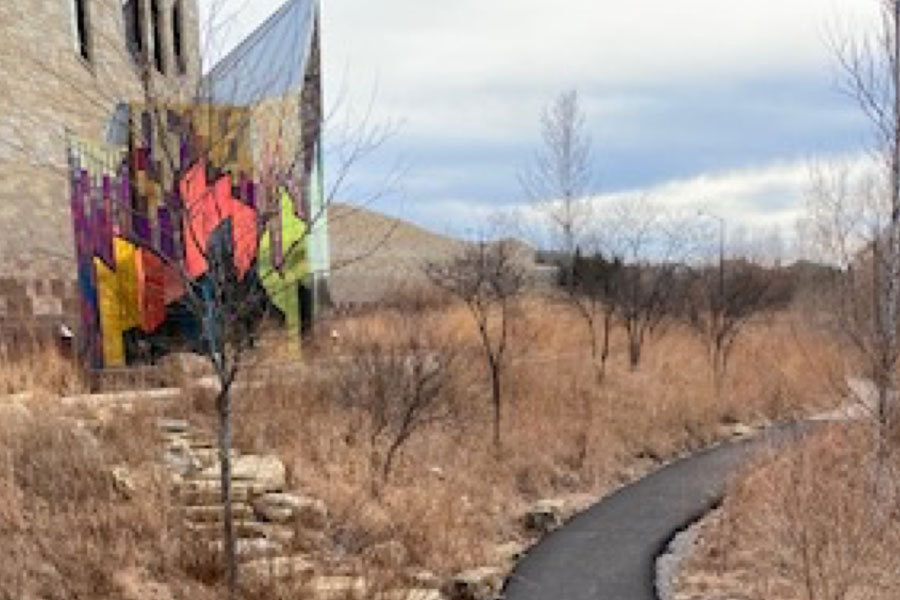 The Overland Park Planning Commission just approved the addition of new trees and the removal and redirection of part of the wetlands trail at the Prairiefire development. Image from city documents

Visitors to Overland Park’s Prairiefire can expect a bit of a new look this spring.

As part of Phase 2 of the project, developers have proposed revisions to the complex’s landscaping. The Overland Park Planning Commission approved the revisions at this week’s meeting.

The proposed changes will impact the small wetlands area directly west of the Museum at Prairiefire, just south of 135th Street.

Due to safety concerns from lack of visibility, developers want to remove a part of the trail that goes under a pedestrian bridge in the wetlands area.

Instead, a sign will be placed at the trail’s fork to show walkers how to continue their journey from the sidewalk or nearby patio. Developers also want to add rocks or stumps for people using the trail to sit on.

Four shade trees and seven evergreen trees will be added along the east side of Beverly Street.

Developer representative Fred Merrill said tending to the wetlands environment on Prairiefire’s property has been an important part of its development, with ongoing wetlands maintenance every year.

“We’ve worked really hard to make sure it was a real wetlands area that the public could enjoy,” he said. “And so all the plants that are there and the vegetation that is there is done in compliance with  those guidelines”

The city reviewed landscaping plans from Prairiefire developers in 2019, at which time the bridge design was still underway.

Merrill said steps have been taken to ensure the bridge doesn’t interfere with Prairiefire’s design and appearance, such as trading the originally proposed wood bridge for a stone one.

Following construction of the bridge, Merrill said navigating the trail in its original location would be too steep for walkers, as well as interfering with natural vegetation.

Given the trail and the sidewalk’s route next to the museum, he said walkers could more easily reconnect to the trail by walking through the patio.

“It still keeps the circular loop in play, and (that way) somebody can go all the way around,” Merrill said.

In discussion, commissioners generally saw the landscaping revisions as the best course of action given the current circumstances of the development.

Commissioner David Hill said, while he admired the addition of the bridge, it did break up the “unified plan or system” the development had before.

As a trail walker himself, he said he didn’t think it was ultimately beneficial for walkers to be going through the muddy and dark part of a trail underneath a bridge.

“When I go under all the bridges I encounter, whether I’m doing it as a pedestrian or cyclist, those to me are the most uncomfortable situations for me,” he said. “I’m usually finding myself just wanting to get through it to get out to the other side. So the fact that there is not going to be an experience in this trail system that takes you underneath to me is not a big deal.”

Commission Chair Holly Streeter-Schaefer said this revision took away from the overall connectivity of the trail and it would be unreasonable to expect cyclists to use the alternative route through the patio.

“I think the connectivity is ruined with this,” she said. “I think it completely defeats the purpose of the trails to the south of the bridge.”

The measure passed on a 6-1 vote, with Streeter-Schaefer voting against it.