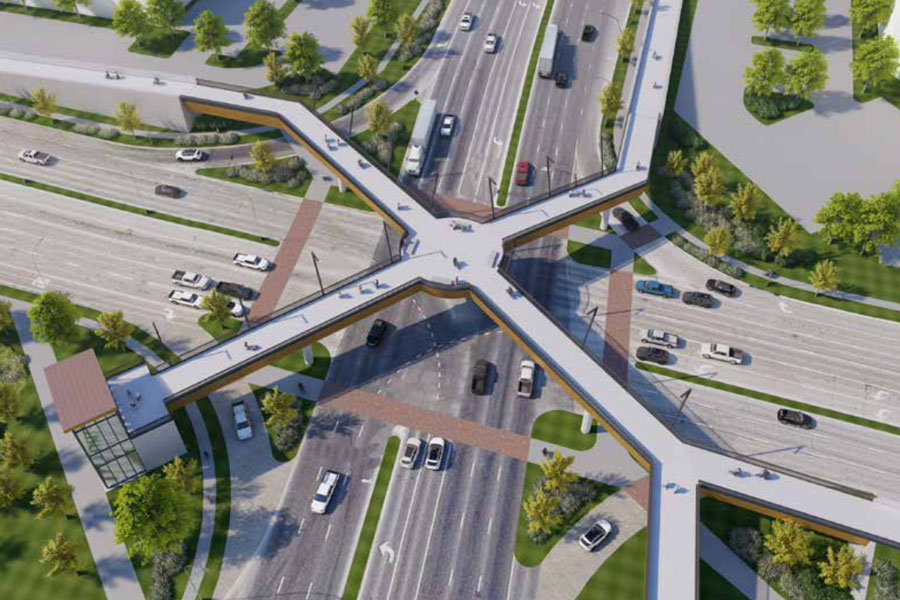 A consultant told the Overland Park City Council Monday that more immediate improvements could include brighter, wider crosswalk paint, raised sidewalks to slow down traffic and enhanced and more visible bike lanes. But a new study also includes potentially constructing a pedestrian bridge at the busy College and Metcalf intersection at some point in the future. Image via Overland Park city documents.

The council reviewed the final plan of the College and Metcalf Mobility study on Monday with an eye toward including it in the city’s comprehensive plan for improving the area over the coming years.

City officials have studied the area since at least 2018, when they first began looking at what it would take to bring more people from the convention center out to entertainment and shopping in the evening.

Focus on crosswalks, slowing down traffic

Earlier studies identified fast-moving traffic and a lack of pedestrian amenities as a problem.

The first action was a “road diet” reducing the number of lanes on College between Nall Avenue and Metcalf.

The latest study, commissioned from RDG Planning and Design, takes a deeper look at the area from Interstate 435 to 119th Street, between Nall and Metcalf with a small bit extending to Lowell Avenue.

Marty Shukert of RDG advised councilmembers Monday that the next projects should be about improving crosswalks at major intersections along College, 110th, 112th and 115th streets.

Some of those improvements could include brighter, wider crosswalk paint, raised sidewalks to slow down traffic at College and Metcalf, enhanced and more visible bike lanes with green conflict zone markings on 110th and 115th Streets, plus some crosswalk realignment.

Signs showing pedestrians where to find restaurants and shops also would be an important improvement, he said.

Shukert also said property owners along College were generally supportive of an idea to dedicate some of their lots to the city for a “linear park” linked by a lighted off-street path. The Marty Avenue Trail could also link to Summercrest Creek Trail, he suggested.

The “core” projects could be done for around $5.6 million, “not an insignificant number but you’re getting a lot,” he said.

Some bigger and perhaps splashier projects the design group envisioned could eventually be included to provide more of an experience for people who want to spend time in the area, he said.

One suggestion was to create terraced steps at the new Aspiria project at the former Sprint campus that would draw that area into the rest of the corridor.

Another possibility was to add paths and trees around the convention center parking lot and retention basin.

Farther down the road, the area could even have self-driving vehicles around the perimeter to ferry people around, he said.

Some councilmembers said they’d received skeptical comments from residents about ideas for a raised pedestrian bridge over the College and Metcalf intersection that could be an architectural statement.

That is not among the most immediate improvements being considered.

The long green light required for people on foot to cross there has the potential to cause traffic backups, Shukert said, which is an argument for a raised bridge.

Mayor Curt Skoog noted that 90,000 people work in the College and Metcalf corridor. While the streetscape served the city well through the 1980s and ‘90s, he said expectations have changed and people now want more places they can walk.

“We need to reinvest in the amenities and assets around our office buildings so they can continue to be class A office buildings,” he said, “so College Boulevard doesn’t turn into what downtown Kansas City was just 20 or 30 years ago.”

The study is a recommendation for how to design the area in the future and does not propose any redevelopment. It does not commit the city to any future construction spending. 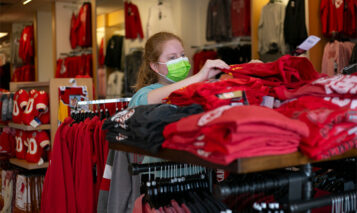