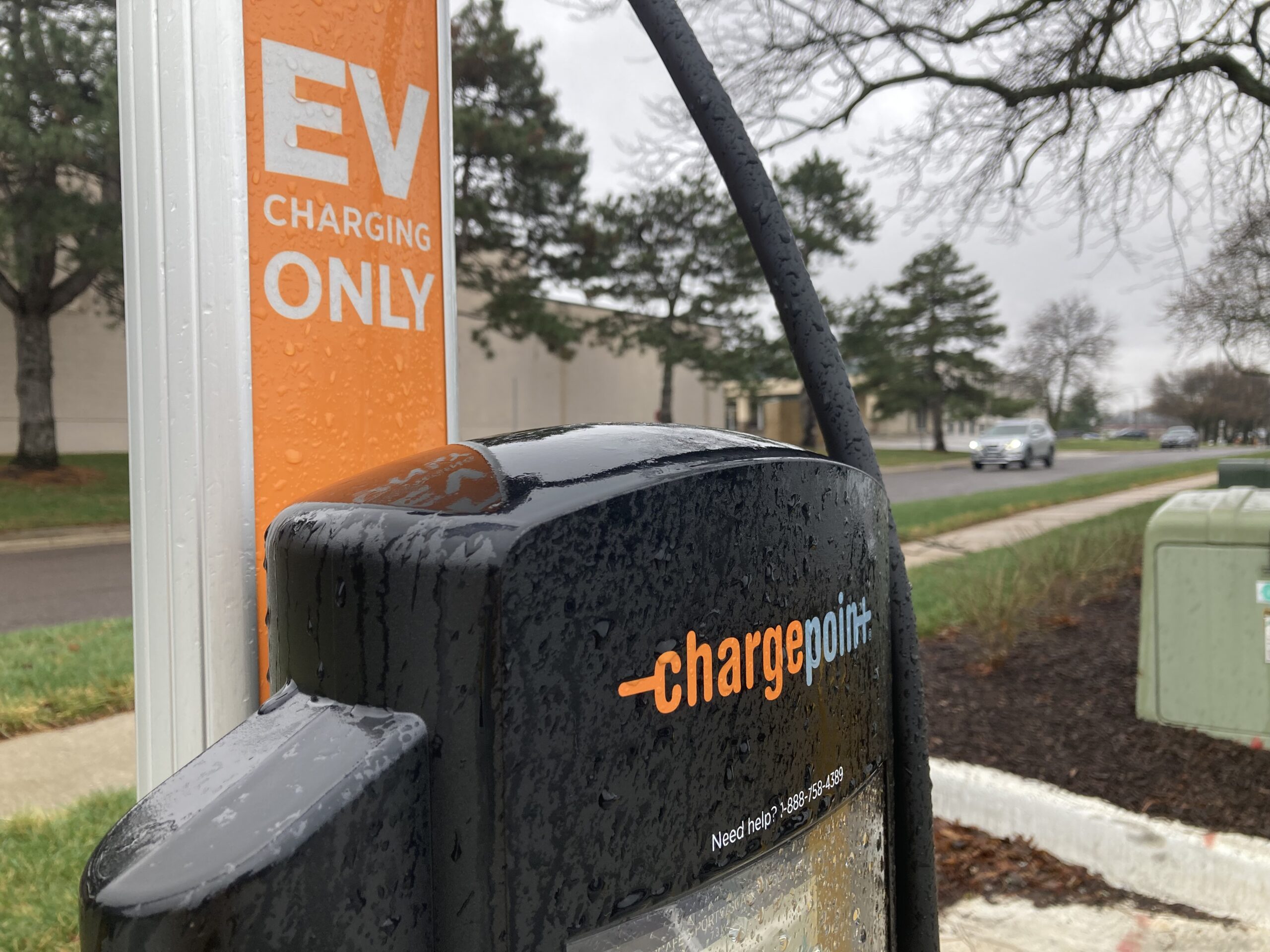 Overland Park councilmembers and city staff are considering a gradual transition to electric and hybrid vehicles for the city's fleet, which drove 3.6 million miles in 2019, burning 12,793 barrels of petroleum and emitting 4,522 tons of greenhouse gas. The city added electric charging stations, above, in the parking lot of the Myron Scafe Building on Antioch Road last year and is set to transition at least 10 city vehicles to electric or hybrid models this year. Photo credit Kyle Palmer.

With climate change concerns and gas prices on the increase, Overland Park councilmembers and city staff are looking to a gradual transition to electric and hybrid vehicles in sedans and lighter trucks as a possible long-range solution.

A council committee Wednesday night heard an analysis from the Kansas City-based Metropolitan Energy Center on ways to make the city’s fleet of roughly 408 vehicles cleaner and more fuel efficient.

The city engaged MEC, which is a partner with the U.S. Department of Energy, to take a deeper look at fuel efficiency.

MEC said the city’s top priorities should be to:

The fuel usage by a city fleet of cars and trucks is considerable, according to the report.

The study looked at several alternative fuels as a way of reducing emissions and reliance on petroleum, but hybrid and electric have emerged as superior choices over ethanol, compressed natural gas and biodiesel for the lighter vehicles, said Jose Vargas, the city’s fleet supervisor.

“That’s where we think everything is moving to,” he told the council’s Public Works Committee Wednesday.

However, supply chain issues prevented the city from acting on as many replacements this year as staff deemed necessary, said Chelsee Newkirk, assistant to the city manager.

Overland Park has signed leases to replace five trucks in the code enforcement department and four sedans in the police department with hybrids, and it will replace one vehicle for the environmental program manager with an electric vehicle, she said.

Overland Park leased its first electric vehicle in 2020 as a test project.

The city also is gradually adding charging stations for electric cars that are also available to the public, she said.

However there are some problems to be solved with the new technology.

The charging stations come with a considerable cost, Newkirk said. Each port at the Scafe lot cost about $25,000 to install, along with yearly subscription and electric usage costs.

Moreover, the charging stations sometimes require an upgrade for the transformer, which can slow down the installation process considerably, Newkirk added.

The transition to electric vehicles also can come with challenges to drivers who have never used them before, Vargas said.

“Now, if you run low on fuel you just pull into a gas station,” he said. But in the case of electric vehicles, “if you don’t have the right infrastructure you spend a lot of time recharging those batteries.”

That change will require more training for drivers, he said.

Committee members discussed the report but took no action.

Councilmember Fred Spears said he’d like to see some of the cost of installation of charging stations recouped, perhaps by passing it along to those who use the ports.

He and Councilmember Logan Heley also asked about the availability of federal funding to defray part of the cost.

Heley noted that prices for cleaner energy sources have been coming down to where they compare favorably to petroleum based energy.

“It’s only going to get less expensive and more feasible to operate a fleet of electric vehicles,” he said. “I’m excited we’re working on how we can be at the right place but ahead of the game in making this industry wide transition.”

Councilmember Melissa Cheatham encouraged staffers to move aggressively where it’s possible, since the power demands of heavy equipment make that category of vehicles less likely to be replaced with electric for the time being.

Councilmember Faris Farassati said he’d like to see a social media campaign to educate the public on why it benefits them to change to electric or hybrid vehicles, since the city fleet is only a small part of the total number of cars on Overland Park’s roads.

Councilmember Jeff Cox said, “On issues like this my vote will go for pragmatism,” which he defined as “the lowest net long term cost.”

He said the cost should include studies and grant applications that take staff time.