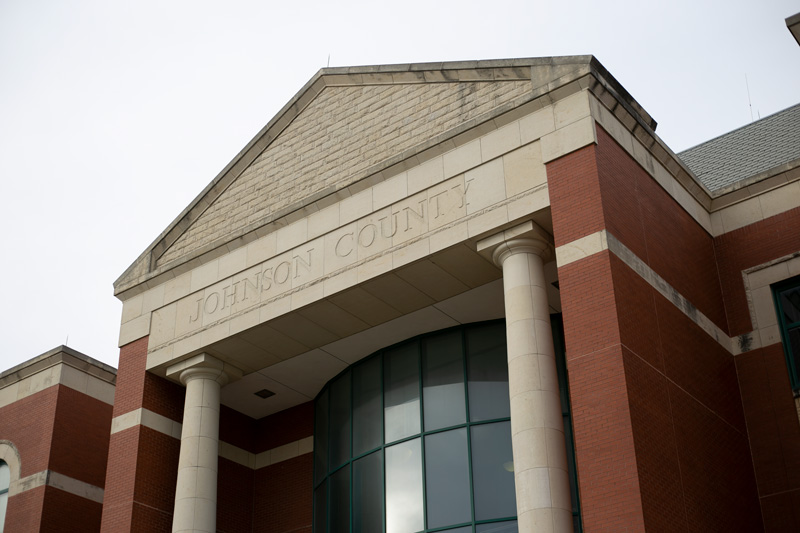 A recent security assessment concluded that the county administration building in downtown Olathe, above, where the county commission meets, was the least secure of more than 90 county-run facilities. Sheriff Calvin Hayden has proposed adding up to six additional security staffers and scanners at the buildings entrances. File image.

The Johnson County administration building in downtown Olathe, where the county commission meets, has serious security deficiencies that need to be addressed by scanning people as they come and go, according to Sheriff Calvin Hayden.

In light of sometimes “highly volatile” meetings in the building, Hayden has proposed adding six staffers for building security, plus improvements in certain lobby areas.

The county already has working scanning equipment left over from the old courthouse, he said.

In discussing the security proposal last week, county commissioners balked at the price tag, which was set at about $564,000 per year.

If adopted, the cost for the rest of this year would be prorated to $314,000, with additional improvements to the building totaling $148,000.

The security of the building, which is also where the county’s human resources office is located, has been under discussion for months.

It has become a more urgent issue since the start of the pandemic two years ago, as public hearings on COVID-19 mitigation measures have drawn boisterous and sometimes angry crowds of people opposed to policies like mask mandates.

Hayden’s office added a chief security position in 2019, and an ensuing security assessment rated the administration building as the least secure of the county’s 92 buildings, Hayden told the commission

Although the building doesn’t have the high public traffic of some others, Hayden said the presence of human resources and commissioners as “conspicuous representatives of government” means, “this is where the bad actors will come.”

He told commissioners that a test of emergency response to the building conducted last week before their regular meeting on Thursday was not encouraging.

It took an officer four-and-a-half minutes to arrive, he said.

“If somebody comes in with a firearm and we’re not screening, all we can do is respond. I just want you to think about how many times you could shoot in four and a half minutes,” he said.

“This is not a matter of if. Just like the schools, it’s a matter of when,” he said, adding that he’d be concerned for the safety of civilian employees working scanners without deputies.

Still, commissioners were reluctant to commit to the annual cost of enhancing security at the administration building.

“I’m not there yet on that part of it,” said outgoing Commission Chair Ed Eilert.

He and some others said they might be open to a smaller increase of fewer employees, perhaps just on certain days.

Commissioner Charlotte O’Hara also noted that the administration building seldom has many people in it.

Violence, “can happen anywhere. It happened at Olathe East,” she said. “The high schools are not screening –”

“And three people got shot,” Hayden broke in.

O’Hara replied, “But this is huge,” referring to a price tag that could total $6 million over 10 years.

Hayden said the commission should consider the worth of its employees working in the building.

Commissioner Jeff Meyers said he’d be open to considering one of the alternatives listed that would provide two civilian employees and make structural security improvements at a cost of $187,000 in 2022.

But Hayden insisted that there needs to be more officers in the front lobby.

“Every expert has told you how to do this right. It is the right thing to do to protect this building,” he said.

The administration building was “wide open” for years and only recently limited the public to one entrance, he said.

“But it still doesn’t prevent somebody coming in with a gun,” he said.

Commissioners discussed the proposal as part of their review of items that will appear on the agenda of this week’s meeting.

Eilert encouraged other commissioners to look at all the alternatives.