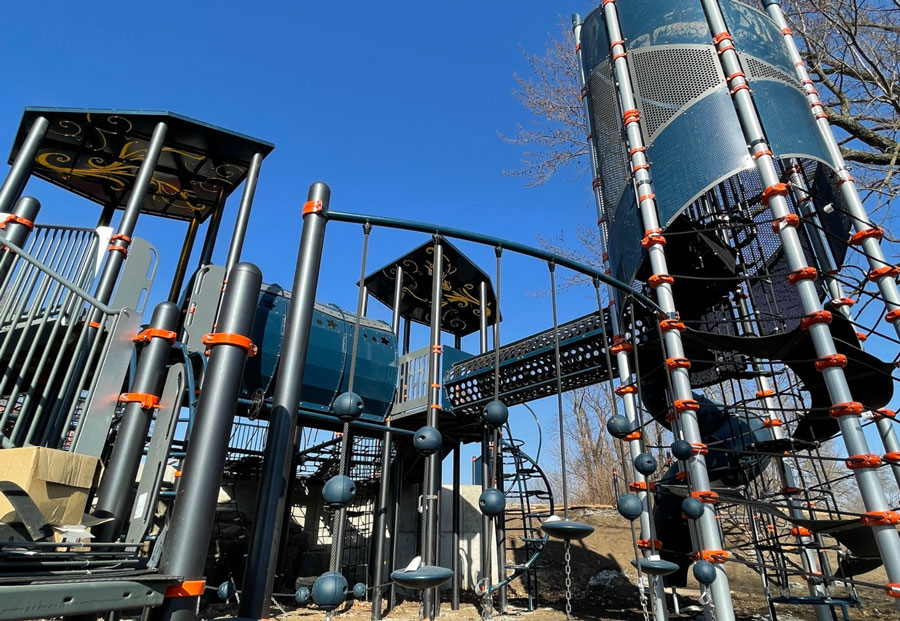 An all-inclusive playground with elevated climbing nets, in-ground trampolines and sensory tunnel will be the centerpiece of a revamped Strang Park in Overland Park.. Image courtesy of City of Overland Park Facebook page

A new and improved Strang Park in Overland Park is on track to reopen this summer for the first time in more than two years with several new features aimed at making the park more inclusive and accessible.

Efforts to remake the 11-acre park at West 88th and Farley Street have been ongoing since last August, and the city gave an update on its Facebook page last week, announcing that Strang Park should reopen this June.

The improvements at Strang include a new all-inclusive playground with elevated climbing nets, a sensory tunnel, in-ground trampolines and a rock wall, all aimed at “promot[ing] tactile, motor and visual skills,” according to the city’s website.

The city is also building a new restroom, shelter and entry plaza with a nod to the historic Strang Line railroad. It will depict a train depot and trolley platform.

They also include an eight-foot loop trail that visitors can take through the park’s open spaces.

Some of the park’s athletic courts will also look a little different. The park’s basketball half-courts will now be on the northwest corner of the park.

The park has been closed for construction for roughly two years to accommodate these improvements.

The plan for its makeover was originally approved in February of 2020, followed by City Council approval. After some delays due to the ongoing COVID-19 pandemic, construction began in August of 2021.

The design contract approved by the city’s Community Development Committee came to $208,000.