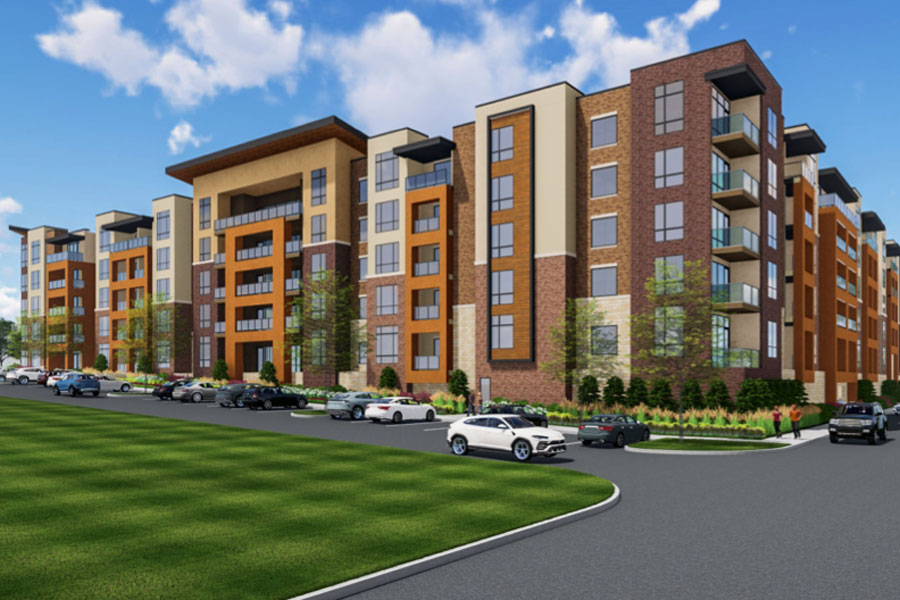 Following Planning Commission approval, the Overland Park City Council is poised Monday night to approve a rezoning request that would allow apartments and a grocery store to be built on 121st and Metcalf. Rendering from city documents

A residential development on the one-time site of a movie theater near 121st Street and Metcalf Avenue in Overland Park is poised to move forward tonight.

As part of its consent agenda, the Overland Park City Council will vote on a proposal for new apartments and a grocery store at the Southglen shopping center, across the street from Blue Valley North High School.

What’s on the table: The proposed development by BK Properties would include a five-story complex with 341 apartments, along with the 19,559-square foot grocery store.

The project also would involve the removal of some of the Southglen shopping center’s land at 119th Street and Metcalf Avenue.

The site encompasses the southern end of the current Southglen shopping center, which includes a Bed Bath and Beyond and BuyBuy Baby.

The roughly 10-acre development would be near the Overland Crossing shopping center across Metcalf Avenue and Blue Valley North High School to the east.

Why it matters: Given the current state of the property, developers and city staff say the development could help bring revenue back to the Southglen shopping center area.

The rezoning request for the plan was previously approved by the Overland Park Planning Commission at last month’s meeting.

At the time, commissioners supported the project and what it would do for the current state of the property.

“I think it’s a great use for the site,” Commissioner David Hill previously said. “Particularly in consideration of the current environment. It’s not quite a blighted property yet, but the parking lot is falling apart. It’s a nice redevelopment for the space.”