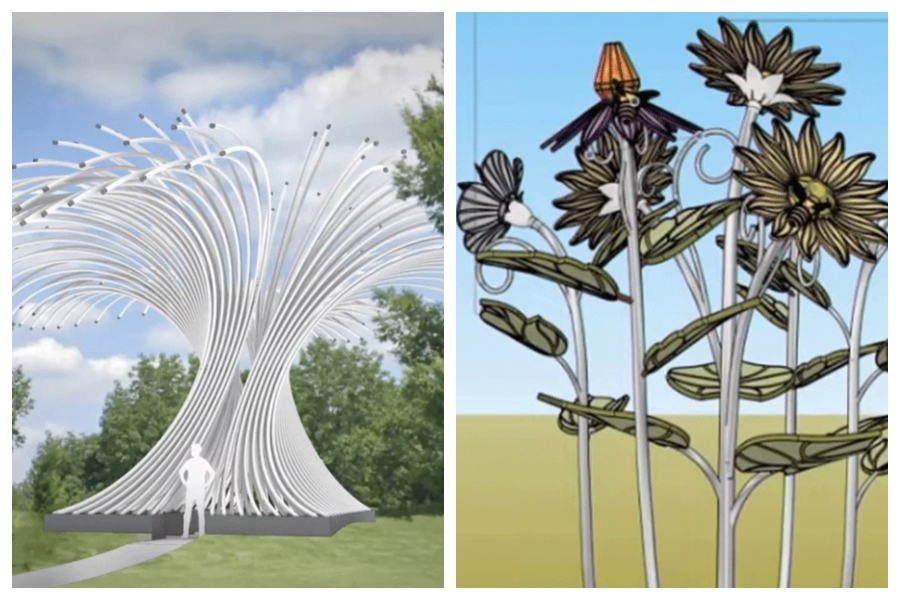 On Tuesday, the Leawood Art Selection Panel met to review two of the three finalists for the city's 75th anniversary sculpture. The finalists reviewed this week included "Reaching" by William Nemitoff, left, and "Flourishing" by Amie Jacobsen. A third finalist's work will be reviewed next week. Image via Leawood city documents.

On Tuesday, a Leawood Art Selection Panel met to review two of the three finalists in the running to design the city’s 75th anniversary sculpture.

Why it matters: The artist selected will have their design built and permanently installed in one of Leawood’s parks to celebrate the city’s anniversary, which takes place in 2023.

Details: The panel is evaluating and ranking the three artists’ pitches based on certain criteria, such as artistic quality and conservation concerns.

Once the artist is chosen, he or she will have the option to build their sculpture in one of two pre-selected locations:

Below is a look into the two pitches presented at the selection panel’s hearing Tuesday night.

The first artist pitch was presented by Leawood-native William Nemitoff for his piece titled “Reaching.”

With friends and family located in Israel, Nemitoff said he had a special connection to one of the proposed sites, Gezer Park, as it is dedicated to Leawood’s sister city relationship with the Gezer Region of Israel.

Drawing on an inspiration from olive trees, “Reaching” is an installation meant to represent roots reaching down into the rich history of both Leawood and Gezer, while simultaneously reaching up to the sky with the promise of future growth.

“Olive trees are one of the longest crops that have been produced in the Gezer Region,” Nemitoff said. “It’s also a very iconic symbol of peace.”

Set to made out clear acrylic and powder-coated aluminum, the piece would have two bunches of 75 strands in honor Leawood’s anniversary.

Titled “Flourishing,” the second sculpture presented to the panel Tuesday was pitched by artist Amie Jacobsen.

Also proposed to be built at Gezer Park, the steel art piece would stand over 22-feet tall and would be 13-feet in diameter.

“Flourishing” would feature a large bouquet of seven wild flowers that are common to the Kansas prairie, including three Kansas sunflowers, two rose mallows and two purple cone flowers.

Five 15-inch long worker bees would also be situated atop of the flowers to represent the Leawood community.

“Bees are such an important part of our ecosystem, and they also represent community well because they work together,” Jacobsen said.

With seven flowers and five bees, the numbers come together to represent 75 for the city’s anniversary.

What’s next: The selection panel will meet once more next week to hear a third and final pitch for “Innocence,” a sculpture by artist Gadi Fraiman.

Fraiman lives in Israel, necessitating a second hearing for the panel, which will meet at 12:30 p.m. on Monday, April 11, to accommodate for a difference in time zones.

After hearing all three pitches, the panel will meet once more on Thursday, April 21, to make a final selection on the winning artist.