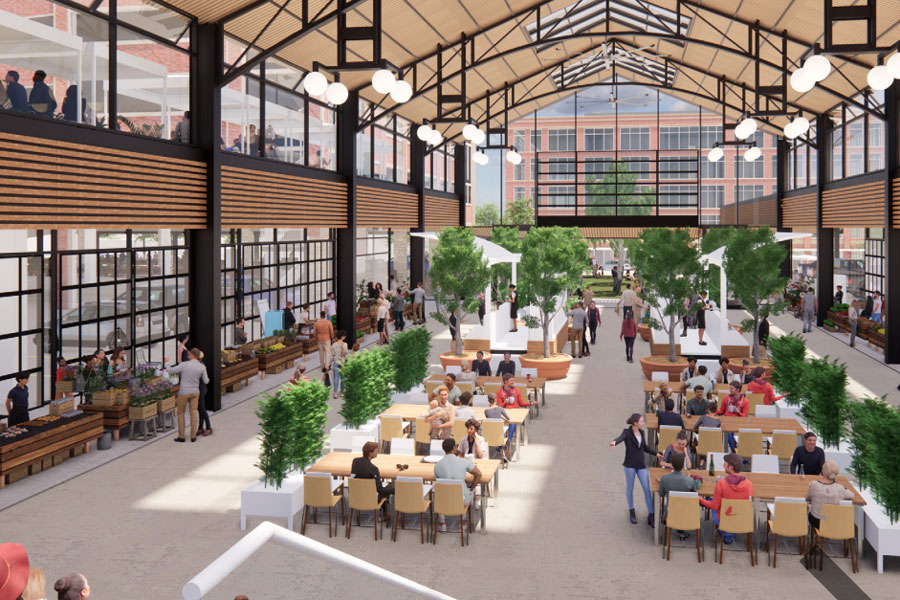 A conceptual rendering of a redesigned Overland Park Farmers' Market submitted by Copaken Brooks. Several councilmembers emphasized the concept is in their very early stages and could change during the public input process. Image via Copaken Brooks and Overland Park city documents.

A conceptual plan that envisions both enclosed and open farmers’ market areas plus an office building in downtown Overland Park has won a four-way contest of ideas for renovating the city’s much-discussed farmers’ market space.

The city council on Monday decided to work with Kansas City-based real estate design firm Copaken Brooks in exploring how the future market area should look.

But the vote only commits the city to using Copaken Brooks for public engagement on market ideas. Any actual development plan would have to go through numerous planning steps before returning to the council for final approval.

City officials have sought to improve the market area since it was decided in 2017 to keep the market in its current location adjacent to Clock Tower Plaza downtown rather than move it to a nearby park.

Still, the location under the pavilion roof, built in 1991, has posed some problems because of the slope of the lot, parking and accessibility.

Councilmembers also wanted to explore the idea of an enclosed space for events or a year-round market.

Last year, they decided to find out if there was a way to do more with some city-owned land in a partnership with developers than the city could do on its own, and a request for proposals was issued.

Four proposals were submitted, the Copaken Brooks plan and three others:

The Copaken proposal was chosen by a selection committee and reviewed by the council Monday during its Committee of the Whole meeting.

Councilmembers and officials familiar with the selection committee process stressed that the ideas presented were very much in the formative stages and not to be taken too literally.

The selection had as much to do with a company’s experience and ability to deal with input as it did with design specifics.

Councilmember Logan Heley advised colleagues to ignore the sketches that came with the proposal, because the final plan would likely change after the public has had a chance to weigh in.

However there were some doubts among councilmembers.

“I don’t know what an office building has to do with the Farmers’ Market,” said Councilmember Scott Mosher, adding that some city property across the street could provide good parking. “

It’s almost like we have an open space and we want to put something there that will make somebody some money and while I’m not against that I just don’t see how an office building right there is feasible to the Farmers’ Market,” he said.

Councilmember Jeff Cox, who voted against the idea, said he disliked using a private company to do public engagement and would prefer the city do that and then hire a contractor to do the work.

Councilmember Faris Farassati questioned the feasibility of office building given lower occupancy rates and said he is wary of putting city owned land into a mix with a private development.

However, others said they hope the partnership will provide some new opportunities for the market to grow.

“We have a farmers’ market that is growing and expanding and our space needs enhancement,” said Councilmember Holly Grummert. “It’s moving this farmers’ market forward, and if we can get something else exciting as well as our farmers’ market, let’s see what that is.”

Mayor Curt Skoog said the city doesn’t have the staffing to take on public engagement for this scale of a project on its own. He reminded members that the council will have the final say on any plans that evolve from it.

The council voted 11-1 in favor of the Copaken partnership, with Cox voting no.

A run-down of all the plans can be found on the city’s web page.