The Blue Valley school board voted to name BV Northeast area board member Kaety Bowers as their new vice president at their regular Monday night board meeting, replacing Jim McMullen, who was stripped of the title last month. Image via Kaety Bowers' campaign website.

Background: The change in leadership comes after BV South area board member Jim McMullen was stripped of the vice president title in a 5-2 vote during a special meeting last month.

That vote came in response to a parent-led petition seeking McMullen’s censure and removal from the board over a series of tweets deemed by some as transphobic and anti-LGBTQ.

Though McMullen lost his leadership position, he remains on the board as a regular board member.

Board’s decision: Bowers, in general, has been an ally of McMullen’s since before both were elected last fall.

They openly campaigned together, emphasizing their opposition to “critical race theory curriculum” and their skepticism about the district’s diversity and inclusion efforts.

Bowers was the only other board member besides McMullen himself to vote last month to keep McMullen as vice president.

In a divided vote Monday, the board approved Bowers to be the new vice president in a 4-3 vote.

The crowd: Prior to the vote, the board took comments from a large crowd at the board’s meeting room at the Blue Valley District Office.

Some of the 20 speakers who signed up to speak during the meeting’s hour-long public comment period voiced support for McMullen and the views expressed in his tweets.

“Five board members stripped the VP of his title and are trying to get him recalled because he personally doesn’t conform to their views,” parent Lisa McMahon said.

However, there were also many speakers who praised the board’s action of removing McMullen’s title as vice president, including Blue Valley North student Ephren Taylor.

“After the last board meeting, I would like to thank the five of you for taking a stand against transphobia and racism,” Taylor said.

Leawood Middle School teacher Riley Long, who identifies as transgender, also approved of the board’s decision but said more action was needed from the board on the matter.

“The lack of education and willingness to get to know trans people leads people to fear,” Long said. “This fear should not dictate a school district. We need clear policies created so that trans students and staff in this district are protected.” 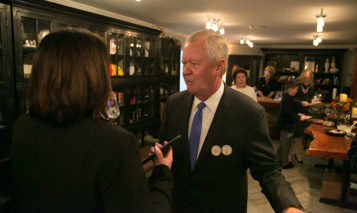