Dozens of Blue Valley North High School students staged a walkout Thursday afternoon to show their support for an individual’s right to choose to have an abortion.

The bigger picture: The walkout came just a little more than a week after the news site Politico published a leaked initial draft majority opinion suggesting that the U.S. Supreme Court intends to strike down the 50-year-old Roe v. Wade decision.

If the landmark case is overturned, the legality of abortion would be up to each state, and at least 26 states are expected to ban or restrict access to abortion if given the opportunity.

In Kansas, voters will decide on a constitutional amendment this August that, if passed, would nullify a 2019 Kansas Supreme Court ruling that found a right to abortion in the state constitution and clear the way for the state legislature to impose new abortion restrictions.

The rally:  Taking place at the school’s bus loop under in the hot afternoon sun, over 100 students joined the rally, holding signs that carried messages like, “My body, my choice,” and “Women’s rights are human rights.”

Chants also filled the air as students yelled, “Not the church, not the state, women must decide their fate!”

Democratic state Sen. Cindy Holscher of Overland Park was a featured speaker at the event.

She told students about the future she saw for Kansas if people did not go out to vote, in the right to one’s bodily autonomy, as well as other personal rights could be threatened.

“I want you to look at this school, this campus, the people you’re here with, the teachers and staff that make a difference in your day… and I want you to think about the fact that in two to four years, this could all be gone,” Holscher said.

She argued that the people who have been working to get the amendment on the ballot are some of the same people who vote against school funding, roads and taxes.

The amendment: The proposed language of the amendment reads, in part, “Because Kansans value both women and children, the constitution of the state of Kansas does not require government funding of abortion and does not create or secure a right to abortion.”

The Value Them Both website maintains that the amendment is a safeguard against laws going into effect that allow “live dismemberment” abortions and tax-funded abortions, though neither of those things is currently allowed.

Rally organizers: The event was organized by a group of Blue Valley North students calling themselves Students of Action.

As a senior at North, rally organizer Ephren Taylor said he and his friends felt like they had to do something after hearing about the leaked high court opinion.

“We knew a lot of the students would be on board because many of us, the younger generation, just tend to be more progressive than the adults around here,” he said.

The group created an Instagram account and made graphics with messages about what actions students can take before later deciding to conduct the rally.

“We needed to stand up because voting is really, really important, and this is going to cause very long-lasting effects throughout the country,” Taylor said. “And we need to stop it right here before it gets worse.”

What’s next: After about a half hour of chanting and speeches, the students returned to class following the walkout.

Students of Action says the group still has plans to be active on social media by posting ways people can get involved, including how to vote in the upcoming Kansas election if they are eligible to do so.

Key quote: “I was blown away with how many people showed,” senior and rally organizer Saihha Parmar “I’m pretty happy with the turnout that we had. It shows how many people in this area care.”

Blue Valley grad battled rare immune condition to get to law school. Now she wants to help others. 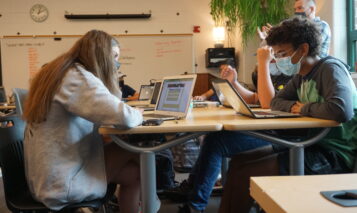