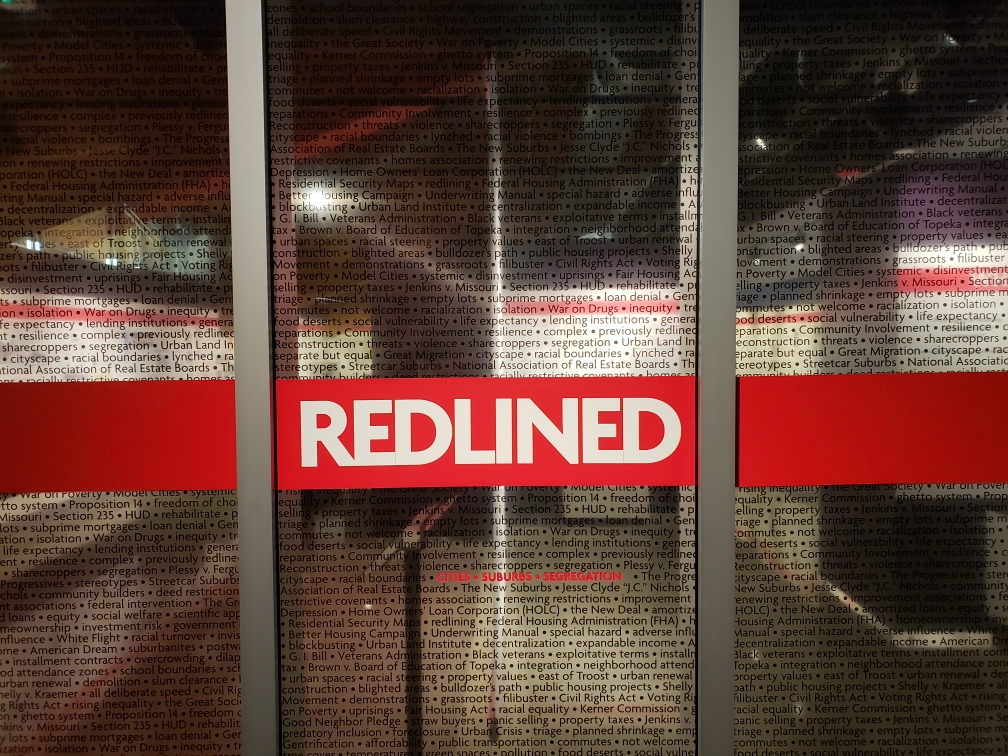 The history and lasting legacy of redlining is the subject of the temporary exhibit, REDLINED: Cities, Suburbs, and Segregation, which will be on display through Jan. 7 at the Johnson County Museum.

The Johnson County Museum is currently displaying a special exhibit created in-house titled, REDLINED: Cities, Suburbs, and Segregation. At the beginning of tours, many visitors share with us their belief that Johnson County was redlined. Historically speaking, this was not true. Read on to learn more about Johnson County’s status.

In the 1930s, at the height of the Great Depression, the federal government launched two new home mortgage programs to help many Americans attain homeownership. These federal programs created maps of more than 230 American cities in which every neighborhood was described and codified in one of four colors. These maps were called Residential Security Maps and they gauged the perceived investment risk in each neighborhood. Today, these maps are often referred to as “redlining maps.” Green signified the best investment (meaning a home would maintain or gain in value over the life of a mortgage loan), blue was second tier, and yellow was third and signified the presence of some risk that the home might lose value.

The meaning of redlining

Redlined neighborhoods, the lowest grade given in the maps, had older, smaller homes, often in disrepair, mixed zoning or uses (industrial next to residential, for example), as well as the presence of people of color. According to the logic of the real estate industry in the early 20th century, African Americans and other people of color devalued their property and the properties throughout the neighborhoods in which they lived. This assumption had no basis in fact but was widely held at the time.

Some historians talk about the act of redlining a neighborhood, like those visible in downtown Kansas City, as a form of containment. The federal government and private lending institutions deemed redlined areas as unworthy of mortgage loans and bad investment risks. These areas and the Black, Latino, and other communities of color who lived in them were then disinvested in for decades, meaning there was little to no private or government investment. It would be extremely difficult to secure a home mortgage loan from the FHA, VA, or a private bank in these neighborhoods, so it was hard to buy a home (read more about the FHA’s policies in this past JoCoHistory Blog post: https://jocohistory.wordpress.com/2022/04/28/the-fha-and-suburbia/).

Looking at the redlining map for the Greater Kansas City area that was made in 1939, you can see that in the lower left corner, Johnson County had no redlined neighborhoods. The areas that were yellowlined were older streetcar suburb neighborhoods with smaller homes. Had Olathe been visible on the map, it is likely that some of its downtown would have been redlined, and so would have the historic African American neighborhood of Fairview. But as represented in 1939, most of Johnson County was undeveloped farmland (unshaded), and the portions that had been developed recently as suburban subdivisions were often greenlined. These areas included the J.C. Nichols developments of Mission Hills and Fairway.

Real estate developers like J.C. Nichols (Country Club District, Prairie Village, etc.), the Kroh Bros. (Leawood), Charles Vawter (Roeland Park), and many others placed racially restrictive covenants on new suburban neighborhoods that prohibited the purchase of homes by African Americans and other people of color. Greenlining typically meant that the area had racially restrictive covenants and other protective, exclusive measures in place, like homes associations (HOAs today) and a long list of property restrictions (rules for how to/how not to use your property). With these barriers present, those living in redlined neighborhoods often had nowhere else to move even if they could afford a new home (read more about how J.C. Nichols transformed suburb building process in this past JoCoHistory Blog post: https://jocohistory.wordpress.com/2020/07/29/j-c-nichols-johnson-county/).

American dream for some 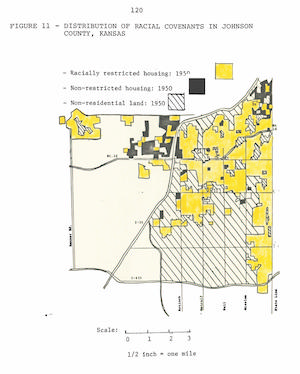 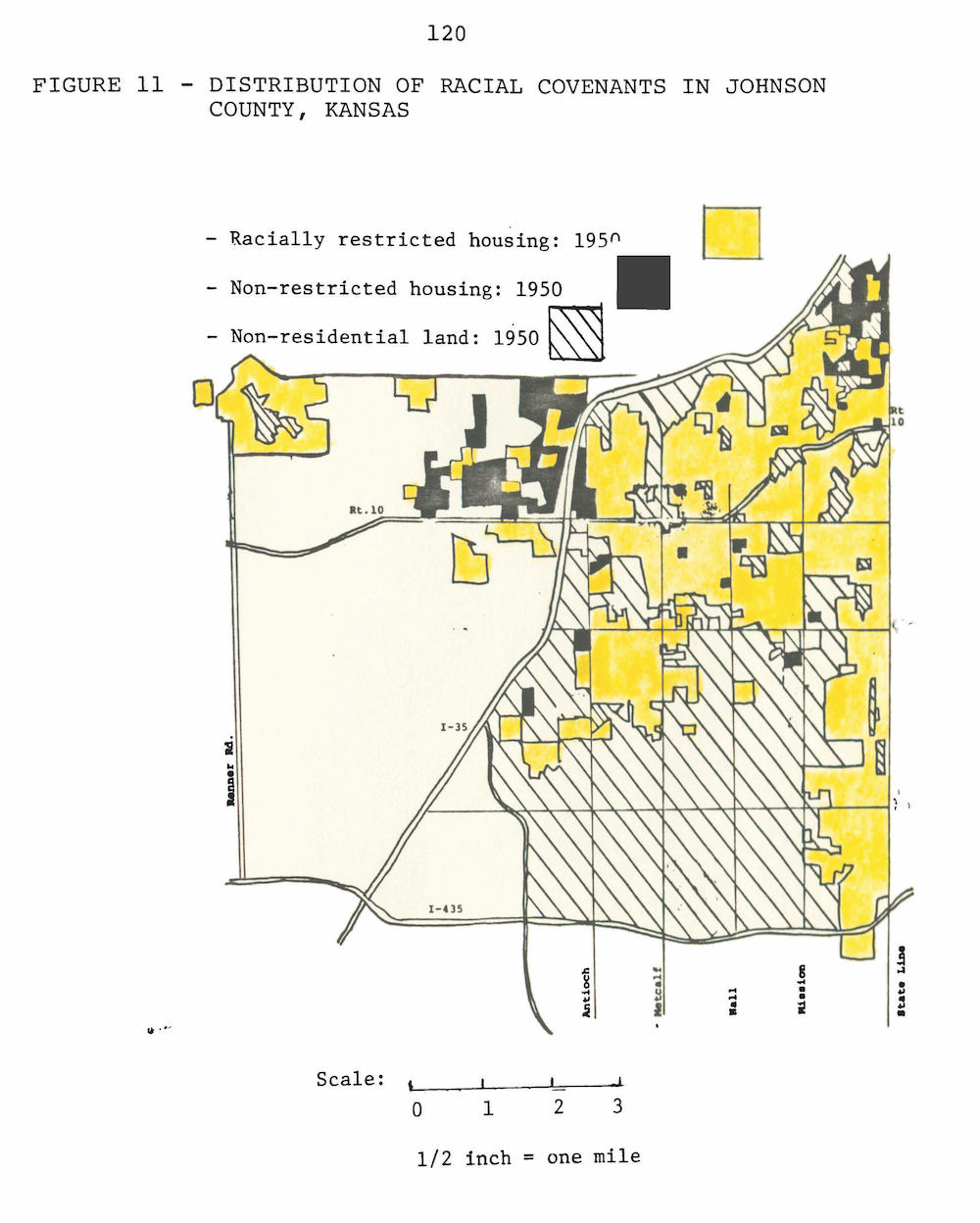 People who say Johnson County was redlined probably mean that it was a heavily restricted suburban community, and this was true. One historian found that 148 of 154 subdivisions built by 1947 were racially restricted. That means that 96% of suburban houses in 1947 in Johnson County were open only to white purchasers. This was the most restricted community in the metro by some 20 percentage points. There were hundreds of subdivisions throughout the Kansas City area containing tens of thousands of homes that were racially restricted – and that represents only one metro area in the U.S. Practically every city regardless of its size had new suburbs under construction between 1910 and 1950.

The system of redlining was a two-part system. On the one hand, urban neighborhoods and communities of color were redlined, which led to the containment of populations of color and disinvestment in those areas by various levels of government and private industry. On the other hand, suburban neighborhoods that were racially restricted were greenlined and open only for white homebuyers. This meant that the emerging mid-century idea of the “American Dream” and homeownership was really only open to some.

To learn more about redlining and its implications for both suburban, greenlined areas and urban, redlined areas, visit the Johnson County Museum’s special exhibit, REDLINED: Cities, Suburbs, and Segregation. This exhibit is included in Museum admission and open Monday through Saturday, 9 am – 4:30 pm through Jan.7. Learn more and plan your visit: JCPRD.com/redlined. 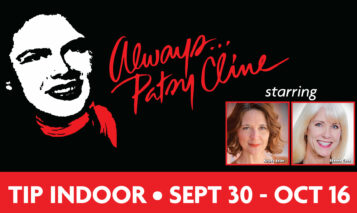 Inside JCPRD: Two brilliant actresses bring the story of Patsy Cline to life onstage at Theatre in the Park! 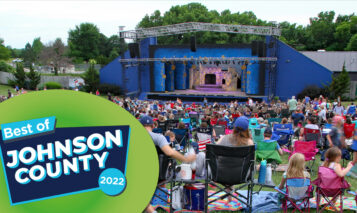 Inside JCPRD: Check out JCPRD’s nominations for Best of Johnson County initiative 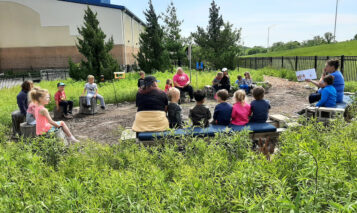 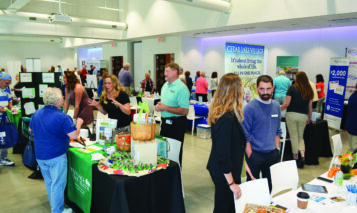 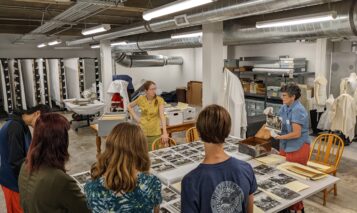